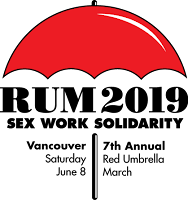 
On June 8, 1984, 300 sex workers and supporters descended on the West End with whistles and noise-makers, proclaiming themselves the thirty-first “public nuisance!”

In January 1983, the Supreme Court of Canada had ruled that all city bylaws used to prohibit sex workers from “loitering” were unconstitutional and against the law. In May 1984, to circumvent the Supreme Court ruling, the City of Vancouver teamed up with the community policing group, “Shame The Johns” and filed for an injunction that named 30 people as prostitutes and public nuisances that would ban them from Vancouver’s West End. Copies of the injunction application had been posted on neighbourhood lamp posts.

Vancouver's 7th Annual Red Umbrella March for Sex Work Solidarity (RUM 2019) held on Saturday, June 8, was a great success again this year! Over 100 participants took part in a re-enactment of one of Canada’s first prostitutes’ protests—organized by the Alliance for the Safety of Prostitutes on June 8, 1984—by parading down Davie Street with whistles and noisemakers amid cheers from the sidewalks and the streets as drivers honked their horns from the cars passing by.

The march mustered at the West End Sex Workers' Memorial lamp post on Jervis Street. It was the first time a sex-worker event was held at the Memorial lamp post since it was unveiled by the City of Vancouver and sex-worker activist Jamie Lee Hamilton on September 16, 2016. Triple-X gave away 25 red ACME Thunderer whistles and 25 red cowbells as well as cheer horns and tambourines to the first 50 participants who arrived dressed up for the event. We tested how loud our whistles and cheers and horns could be and we were ready for our own traditional "Rin Tan Tin," a historic form of prostitutes' protest in the Victorian era that dates back to medieval times.

Participants also received a free booklet celebrating 1980s sex-worker activism [20MB PDF] in Canada, that includes historic photos of sex worker activists protesting in Vancouver and in Toronto, as well as pamplets and posters including early 1980s safe sex education and AIDS activism. The booklet also sketches the feminist pornography wars of the 1980s, followed by details about the films screened at RUM 2019.

The Pacific Cinémathèque on Howe Street was the RUM 2019 route finale, at which time participants were invited to come in to the cinema and watch a rare 1986 sex work film for free! The award-winning feminist classic, "Working Girls," by Lizzie Borden was brought to Vancouver by Triple-X.


"Working Girls" may seem a bit gritty, as it is such an accurate glimpse into the job, and the characters are as true to life today as they were when the film premiered. "Working Girls" was nominated for two Sundance awards and won one. The vérité-styled film takes place during one day in a Manhattan bordello, and is told largely through the eyes of Molly, who arrives to work on her ten-speed bike. The filmmaker talked with over 300 working women hanging around the middle-class "houses." According to Roger Ebert, "her movie helps explain why the world's oldest profession is, despite everything, a profession." "Working Girls" is available for viewing at Vimeo On Demand for $5.49 (Cdn).


Triple-X worked with the filmmaker Lizzie Borden to import the 35mm reels from Contemporary Films, a film archive in London. It was a bit of a shipping ordeal and expense, but the audience reaction was well worth it! The film was introduced by Andy Sorfleet from Triple-X, followed by a door prize raffle of five Femme Productions adult films by Candida Royalle (which were donated by filmmaker, Sheona McDonald — we'll talk more about her film in a minute.) Ticket stubs were drawn by Brenda, from Sex Workers United Against Violence, one of the RUM 2019 organizing partners.

"Working Girls" was rated restricted when it premiered in B.C. in 1986. And, because of this historical fact, the B.C. Film Classification Branch loaned Triple-X the 35mm reel of the “Restricted Cat” animation from the era. Film enthusiasts loved it!


At 6 p.m., RUM 2019 participants headed over to the Carnegie Community Centre on Main Street for the Red Umbrella edition of Documentaries for Thinkers night, hosted by University of British Columbia's Humanities 101 program. The feature film was Sheona Macdonald's, "Candice," a touching documentary about Candida Royalle, who died of ovarian cancer before the film was finished. Other films in the program Saturday night included "Prowling By Night" (by Gwendolyn, National Film Board, 1991), "Our Bodies Our Business," (George Stamos, 2016), and "Nurse Annie" (Annie Smith, 1986). “Nurse Annie” was on hand to introduce her film. Both movie events were well attended with audiences over 60 people.


Media coverage was very supportive again this year. The Georgia Straight featured the Red Umbrella March in two stories leading up to the event. Triple-X president, Andrew Sorfleet gave a live in-studio, candid 7-minute interview for CBC’s On the Coast radio show, broadcasting to all of B.C. and the Yukon on Friday, June 7, as well as an interview for News 1130 radio. Television coverage included a segment on the CBC Evening News. On July 13, Charlie Smith published a great piece in The Georgia Straight featuring the 7th annual march with interviews with Canada's first openly gay MP Svend Robinson and other participating activists: "Trudeau government accused of jeopardizing sex workers' safety by refusing to amend Conservative legislation."


Triple-X volunteer videographer Elaine Ayres made a 20-minute video of the entire red umbrella march. It’s a hoot! This year’s theme was to re-enact the historic protest down Davie Street on June 8, 1984. You can view it here on Vimeo: RUM 2019. Thank you again this year to the courteous and professional escorts from Vancouver Police for keeping participants safe while on the road in traffic.


RUM 2019 was organized by the Triple-X Workers' Solidarity Association of B.C. along with our community partners: Sex Workers United Against Violence (SWUAV), PACE Society, Pivot Legal Society, SWAN Society Vancouver, B.C. Coalition of Experiential Communities and FIRST: Feminists for sex work decriminalization. Vancouver's Red Umbrella March was inspired by the very first Red Umbrellas March organized by the Comitate per I Diritti Civili delle Prostitute as part of a performance art installation at the 49th International Biennale in Venice, Italy, on June 8, 2001.

RUM 2019 organizers would like to thank everyone who came out and participated to show their solidarity! Thank you to RUM 2019 donors: Rob and Diane; Triple-X Directors, Howard, Will and Andrew. Also, thank you to Pacific Cinémathèque, UBC Humanities 101, Terence Lui and the Carnegie Community Centre; Lizzie Borden, Sheona Macdonald, Consumer Protection B.C., National Film Board of Canada for films; The Georgia Straight; and our fabulous volunteers Elaine, Brook and Sarah, Cherryl and Greg, Ariel and Ava, and Ryan visiting from Ottawa!

Thank you for sharing your RUM 2019 photos on social media!

Posted by Andy Sorfleet at 5:44 PM