NOTE: This article links to some awesome resources on this topic!

There is a long and troubled history when it comes to PrEP research and sex workers.

PrEP (HIV pre-exposure prophylaxis) is the idea that a person could take a pill once a day and be protected from catching HIV, not unlike the birth-control pill which protects from unwanted pregnancy.

The troubles began in 2004, when Gilead's HIV treatment product, Viread (tenofovir) was set to be tested on 960 sex workers in Cambodia.

The Cambodian Women's Network of Unity -- a group of sex worker activists -- demanded health benefits for those who would become HIV-positive.

The WNU protest was very effective, and researchers halted the placebo-controlled trial after "a verbal directive" from the Cambodian Prime Minister, Hun Sen, that the trial violated human rights.

By 2006, two more tenofovir PrEP clinical trials which involved sex workers were also shut down because of ethical concerns as a result of sex worker and AIDS activists protesting in Cameroon and Nigeria. From 2004 to 2009 three PrEP trial protocols were refused ethics approval in Malawi.

As a result of these clinical trial closures and because of such successful activism, new clinical ethical guidelines were produced by UNAIDS.

In 2011, the FEM-PrEP clinical trial in Kenya, South Africa and Tanzania involving 2,120 women was stopped early because of lack of efficacy. In 2012, the VOICE clinical trial in South Africa, Uganda and Zimbabwe involving 5,069 women found no significant difference in the rate of HIV seroconversion between a group receiving oral tenofovir and a tenofovir vaginal gel and the group receiving the corresponding placebo.

While there were still little data for efficacy in women, the U.S. Food and Drug Adminstration approved Truvada for PrEP in 2012. Involvement in commercial sex was listed by the U.S. Centers for Disease Control as risk factor for which Truvada should be prescribed for HIV PrEP.

Truvada for PrEP Comes to Canada
In February 2015, Health Canada also approved Truvada for HIV PrEP in Canada and also listed "involvement in commercial sex" as a risk factor for which Truvada should be prescribed. 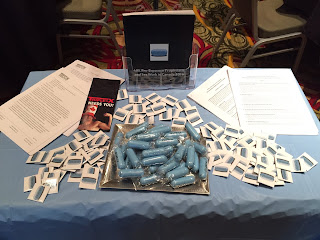 As more provincial and national guidelines were being drafted, involvement in commercial sex, or transactional sex, continues to be listed as a risk factor for which Truvada should be prescribed for HIV PrEP.

Risk factors also typically include geographical areas or social networks where there is a high number of people who are HIV-positive, as well as illegal drug use.

At the 2016 Canadian Association of HIV Researchers (CAHR) conference in Winnipeg an ad hoc committee of HIV prevention professionals, doctors and researchers, supported by the Canadian HIV Trials Network funded by the federal government through the Canadian Institutes of Health Research, presented draft guidelines for prescribing Truvada as PrEP [http://triple-x.org/safety/prep/CanadianPrEPguide-201605.pdf].

Once again, the guidelines mentioned "sex trade workers" as one of the groups with a "significant risk of having transmissible HIV."

Because the researchers drafting the guidelines had failed to consult sex workers, seven organizations who work with sex workers drafted an eight-page letter which outlined serious concerns [http://triple-x.org/about/pr/PrEPguideLetter-160531.pdf].

Triple-X Workers' Solidarity Association of B.C. who authored the letter has yet to receive a formal response over a year later. A final draft of PrEP prescription guidelines are expected sometime this year.

National Consultation
In October 2016, funded by a grant from Elton John AIDS Foundation, Triple-X in partnership with the Dalla Lana School of Public Health, University of Toronto, organized and hosted a national consultation and invited 23 organizations from 10 provinces and territories who provide advocacy or services for sex workers.

Fifty women, men and trans people from across Canada that work with sex workers met in Toronto. The purpose of this national consultation was to give participants the opportunity to educate themselves, explore and grapple as a group with the implications of PrEP on the sex industry.

Sex workers and sex work advocates are concerned that the new HIV prevention drug, Truvada could result in elevated risks for sex workers, including new pressures from clients and the marketplace to engage in condomless sex because sex workers are expected to be on PrEP.

At the national consultation in Toronto, the Dean of the Dalla Lana School of Public Health, Dr. Howard Hu, gave sex workers a warm welcome and stated that...

Triple-X and DLSPH held an ancilliary event at the 2017 CAHR Conference in Montreal on April 5 to present "#SWPrEP: HIV Pre-Exposure Prophylaxis and Sex Work in Canada 2016" [http://triple-x.org/pdf/SWPrEPbook.pdf].

This report contains the transcripts of all the expert presentations as well as as the discussions that ensued between sex workers and those who provide services for sex workers.

The #SWPrEP report also features a chronology of PrEP research and a factsheet on Truvada side effects and stills and interviews from sex workers' rights activists featured in the historic 1989 video, "Our Bodies Our Business" which was screened at the 2016 consultation [https://vimeo.com/195574653].

In addition, "#SWPrEP," a seven-minute video that teases out the issues discussed at the consultation [https://vimeo.com/209825247].

"Nurse Annie" (Triple-X director, Anna Smith) made a surprise appearance in full uniform and gave us a sneak preview of a film she made in 1986 - Canada's first safer sex film.

#SWPrEP was funded by Elton John AIDS Foundation with additional support from Gilead Sciences Canada, Inc., and Canadian Institutes for Health Research (CIHR) a funding program of the federal government.

Included with the report is a 2Gb USB drive which contains the PDF version of #SWPrEP complete with hyperlinks to many of the resources and research available online.

In addition there are three video files: #SWPrEP: Pre- Exposure Prophylaxis, Our Bodies Our Business: Prostitutes’ Rights Activists at the 5th International Conference on AIDS 1989, and The Condom: How-To.

Andrew Sorfleet has worked in the sex industry for over a decade and has been a sex workers' rights activist since 1990. He is currently president of the board of Triple-X Workers' Solidarity Association of B.C.
Posted by TR at 7:37 PM