Sex Workers Are Preventing AIDS, Not Spreading It (VIDEO) 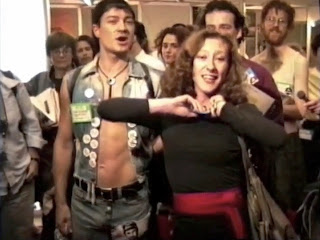 To commemorate International Day to End Violence Against Sex Workers on December 17, Triple-X Workers' Solidarity Association in partnership with University of Toronto's Dalla Lana School of Public Health will premiere Our Bodies Our Business, a video made from historic footage of prostitutes' rights activists at the 5th International Conference on AIDS, in Montreal, 1989.


About Our Bodies Our Business

Our Bodies Our Business was produced as part of a recent national consultation on PrEP and sex work held in Toronto, funded by Elton John AIDS Foundation.

Created by George Stamos with video shot by ACT UP New York filmmaker Catherine Gund, Our Bodies Our Business showcases activists, Danny Cockerline and Valerie Scott from the Canadian Organization for the Rights of Prostitutes (CORP), as well as Cheryl Overs from the Australian Prostitutes Collective (APC), Carol Leigh - The Scarlot Harlot - from COYOTE, San Francisco and Toronto activist Tracey Tief.

Our Bodies Our Business documents the resilience, artistry and power of prostitutes' rights activists as they confront stigma and prejudice head on in actions throughout the conference, including conference sessions full of HIV researchers who study prostitutes. They challenge dangerous myths that fuel violence about sex workers spreading AIDS.

Since the emergence of AIDS in the early 1980s, prostitutes, like gay men, were scapegoated for the spread of AIDS. By 1989, public hysteria regarding HIV-positive prostitutes erupted in several places, sparking calls by government officials for mandatory HIV testing and even quarantine, despite the fact that such legislation would contradict national AIDS strategies.

In 1987, B.C. Minister of Health introduced amendments to the Health Act which enabled Medical Officers of Health to order HIV-positive individuals, whose sexual practices were considered "unsafe," into "isolation, modified isolation, or complete quarantine."

In 1988, Ontario Minister of Health, Richard Shabas called for legislation to quarantine HIV-positive people who continue to have sex - even with condoms - or who share needles.

In 1989, a study by the BC Civil Liberties Association documented AIDS discrimination which including human rights complaints that involved solitary confinement for HIV-positive prisoners, and quarantine of an HIV-positive sex worker in an emergency shelter in Vancouver. In Australia, Health Minister Peter Collins called for HIV-positive persons to be banned from working in the sex industry. This moral panic fueled increased stigma and violence against people working as prostitutes.


About International Day to End Violence Against Sex Workers

December 17, 2003, Sex Workers Outreach Project (SWOP-USA) held a vigil in Seattle, Washington for the victims of convicted Green River killer, Gary Ridgway, who murdered at least 71 women most of whom worked as prostitutes.