"Trauma Bonds": A Weapon to Deny Agency to Sex Workers 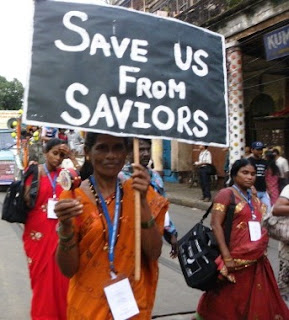 As someone who stands alongside adult sex workers and allies across Canada in the fight for rights, respect and a safe work environment for people in the sex industry, I’m vehemently opposed to human trafficking.

Nobody of any age or nationality should ever be forced, coerced, beaten or exploited into doing any work they don’t want to do.

But that said, the Ontario government’s recent news release about the $72 million it will invest in anti-trafficking measures raised a whole lot of red flags for me.

With so much emotion and so few facts around trafficking in Canada, I read between the lines of that news release and see nothing but more police efforts targeting non-trafficked people in the sex industry.

It hasn’t always been like this. Canadians used to understand that adults who choose to sell sexual services aren’t necessarily being trafficked, and that it’s important to make the distinction.

Presumably the Ontario taxpayers putting up $72 million of their hard-earned income expect to see that money spent on preventing and prosecuting actual cases of trafficking, not on targeting adults who choose to work in the sex industry.

But things changed in recent years after the influential anti-sexwork movement seized on the concept of trafficking as a means to force governments to take action against consensual sex work.

Things got even muddier when police departments started counting crimes of living off the avails of prostitution as “trafficking-related,” boosting what scant statistics exist as a way to make a public case for funding anti-trafficking initiatives.

Using much rhetoric and scant evidence, the anti-sexwork movement has produced countless reports, web sites and “fact” sheets that essentially position sex trafficking and sex work as the same thing. 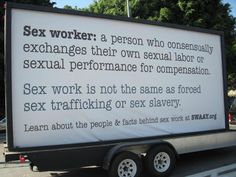 And never mind if sex workers say otherwise. “Victims” are presumed to be so controlled by whoever is trafficking them that their consent counts for nothing.

In fact, I felt a little traumatized myself to read the phrase “trauma bonds” in that news release from the Ontario government. It’s important that Canadians understand what a term like that signals to sex workers. This was one paragraph that really stirred up the red flags for me:

“In many cases of trafficking for the purposes of sexual exploitation,” writes the Ontario government, “trafficked persons may develop ‘trauma bonds’ with their traffickers, and may not view themselves as victims. As such, human trafficking is believed to be a vastly underreported crime.”

On the surface, the paragraph is vague enough to be true. But when it’s put out there with no evidence or statistics to back it up, it’s also vague enough to justify just about any action by the state if it can somehow be construed as necessary to stop trafficking – which in turn has become broad enough in its definition to single out adult sex work for much more police attention.

Think about what that means for sex workers, who not only have a very tense relationship with police at the best of times because of the way their work is viewed, but in many instances count police among those who have traumatized and abused them.

Think about what it means for a whole class of workers to be denied agency just like that, deemed so deluded by their trauma that their actual, lived experiences of working in the sex industry mean nothing.

Trauma bonding is a term coined 20 or so years ago by U.S. self-help author Patrick Carnes to describe exploitive relationships. Like the Stockholm syndrome, it gets used to explain why some people continue staying with an abusive spouse, bad boss, incestuous family member and so on, even when they’re being harmed by the toxic relationship.

Such situations exist, of course. But what the anti-sex work movement has done is usurp these terms as a way of shutting sex workers out of any public discussion around their own industry if they don’t like the direction of the conversation. “Too traumatized to be listened to, and the poor things don’t even know it.” How convenient.

The discussions around trafficking are deliberately emotional, not factual. I really had to work hard to find any clear information when I was looking for the facts around trafficking in Canada for this piece. The best stats turned out to be in the latest U.S. Department of State’s country-by-country report (2015).

That report tells us that in 2014, Canadian police charged 121 people with some kind of trafficking offence, and 22 sex traffickers were convicted that same year. (And here’s something noteworthy: Of those 22 convictions, only eight actually went under trafficking laws. The other 14 were sex-work crimes, which have apparently now been rolled into “trafficking” statistics.)

If there’s a crisis of human trafficking in Canada, you’d never know it by the statistics. Both the trafficking-related charges and convictions in 2014 were less than in 2013. Just to put things in perspective, police reported 1.8 million crimes in Canada in 2014, of which trafficking accounted for .0004 per cent.

Some think we should be following the lead of the U.S. in giving trafficking the profile it deserves. But consider the U.S. stats in that same report: 208 federal human trafficking prosecutions between fiscal year October 2013- 2014, and 335 people charged. That’s out of 11.2 million arrests that year.

So when the Ontario government says it has 65 per cent of Canada’s trafficking cases, we should remember they’re talking about 40 offenders, and even then the majority are just the normal sex-work statistics around people convicted of living off the avails.

Yes, any case of trafficking is too many. But what we’re hearing these days is people making a case for why the adult sex industry ought to be considered trafficking.

We are witnessing an active campaign to ignore the recommendations of the highest court in the land, and to affirm through further criminalization and emotional hyperbole that an entire class of Canadian worker must be denied human, civil and work rights so that the good and righteous can continue to hate what they do for a living.

Activities of the adult sex industry are being redefined as trafficking. Safe escort agencies are closing down and people are working alone more, because the laws prevent them from working together.

Pressured by their clients, who since 2014 have newly been declared criminals, workers are seeking out even more discreet work places, increasing their vulnerability.

Is this really what we wanted? 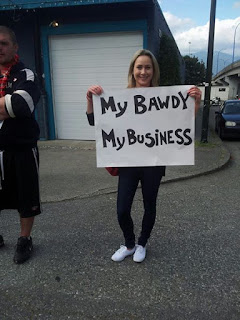 Have we spent all these years anguishing about Robert Pickton and the Highway of Tears and Canada’s thousands of missing aboriginal women, only to walk straight into this emotional, uninformed and harmful campaign to deny sex workers even more rights, self-determination and inclusion?

Does it mean nothing that that Amnesty International, the World Health Organization and the United Nations have all endorsed decriminalizing the adult sex industry? Do we think we know better?

We shed crocodile tears for all the “victims” and then set about making life even worse for sex workers. The hypocrisy sickens me.

I want to stress again that I stand united with Canadians against human trafficking. But I’ve been fortunate enough to walk alongside sex workers for 20 years now, and denying basic human rights and work safety to them is no way to do that.

Let’s go root out trafficking where it’s actually happening, and end this punitive, moralizing practice of trying to silence and harm the very people we’ve supposedly set out to help.

Jody Paterson is a former journalist and communications strategist in Victoria, B.C., and a past executive director of a non-profit run by and for people with experience in sex work, Peers Victoria.

2011 Library of Parliament report on trafficking in Canada, with 2015 update:
http://www.lop.parl.gc.ca/content/lop/researchpublications/2011-59-e.pdf

The Truth About Trafficking
https://www.theguardian.com/commentisfree/2012/oct/24/truth-about-trafficking-sexual-exploitation
Sex Work is Not Trafficking
http://www.nswp.org/sites/nswp.org/files/SW%20is%20Not%20Trafficking.pdf

Sex Work and Trafficking: A Donor-Activist Dialogue on Rights and Funding
https://www.opensocietyfoundations.org/sites/default/files/dndreport_2009.pdf

Jody Paterson is a writer, editor and communications strategist with 27 years of experience writing for and managing B.C. daily newspapers. She currently does communications work in Canada and Central America for non-profits whose efforts centre around social justice, whether for sex workers, people with disabilities, children with complex health needs, or women farmers in Nicaragua.

Jody is a past executive director of the grassroots sex worker support organization Peers Victoria, in Victoria, B.C. She continues to work with and support Peers Victoria on a number of fronts, including as a representative for Peers on the Canadian Alliance for Sex Work Law Reform.
Posted by TR at 11:50 AM