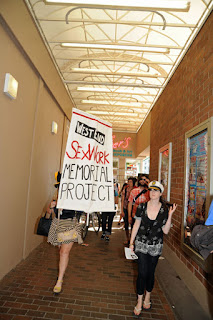 In the 1970’s and 1980’s, Vancouver’s West End was the home of a vibrant, close-knit community of sex workers.

Sex workers lived together, worked together, and looked out for one another during those days.

She describes the sex worker community as glamorous, close, and on the cutting edge of sexual health and safety practices. The community was a pimp-free zone.

‘If a pimp came around, we would tell him to put on a dress and some lipstick and suck cock like the rest of us,’ she says.

They put out a journal called the Whoreganizer. They also contributed greatly to the neighbourhood economy.

Then, in the 1980’s, many of the residents of the West End, started the ‘Shame the Johns movement,’ which was more about shaming the sex workers.

Hollie Smith, who, along with nine other Vancouver sex workers and allies, including myself, created The Hooker Monologues, took to the stage in March with a story of the Shame the Johns movement.

Hollie describes being rounded up by an angry mob, shouted at and hit with signs, along with her friends.

Soon after, mayor Mike Harcourt introduced the Street Activities bylaw. Sex workers were fined between $350-$2000 dollars for their activities on the strolls. The Supreme Court later found this bylaw unconstitutional, but it didn’t stop the city from collecting $28,000 in fines from the West End sex workers. $15,000 of the money collected went to pay Gordon Price who spearheaded Shame the Hookers and Concerned Residents of the West End (CROWE).

Sex workers were violently expelled from the West End. The workers were politically involved, and they fought against this treatment, but in the end, they were driven out by the politicians, residents, and their lawyers.

The displaced workers moved to the industrial area in Mount Pleasant. That was when the murders started happening. There were three murders, known as the valley murders, that were likely committed by the same perpetrator.

Eventually, sex workers found their way to the Downtown Eastside. Displacement, police harassment, criminalization, and lack of resources created the ideal conditions for serial killers such as Robert Pickton. Hollie Smith writes about this time in The Hooker Monologues, describing a once-close community splintered and driven into unsafe areas, subjected to violence and police harassment. 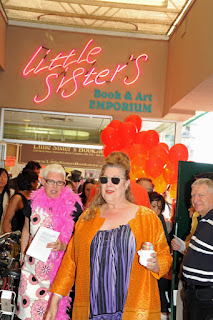 In 2008, Jamie Lee Hamilton attended a mayoral debate at Saint Paul's Anglican Church in the West End, moderated by Jim Deva of Little Sister’s fame. She asked the mayoral candidates if they would be willing to issue an apology to the sex work community for their actions in the 1980’s. Gregor Robertson said that he would be willing to do so, and that he felt it would start the process of healing for the community.

Jamie Lee began the process of seeking restitution from the city. She describes a long process of looking through archives, finding evidence of what had happened, and writing a report to the city.

Jamie Lee has been working on this memorial, with support from the city, ever since. On June 15th, 2016, a group of sex work exclusionary radical feminists, or SWERFS, gathered at City Hall to protest what they see as the city’s lack of initiative in enforcing Bill C-36, the new oppressive laws around sex work introduced by the Harper government in 2014.

“The mayor is being targeted,” says Jamie Lee. “He has made some unfortunate statements in the past that the abolitionist movement has pounced on. He has said he believes that all prostitution is violence against women. He has also said that johns should be shamed. I disagree with that statement.”

Despite the loud voices of a radical few that oppose seeing justice done to the sex work community, it is vitally important that the mayor show leadership now by standing by the community and keeping his promise by way of an apology.

Jamie Lee says that the memorial is a testament to what is positive, a beautiful time during which sex workers contributed economically and culturally, as indeed we have been doing for a very long time.

It is vital that we remember the vibrant history of sex work in our city and honour the contributions of sex workers to our society.

Carmen Shakti is a Vancouver sex worker. She combines escorting with massage, Tantra and Taoist sexual yoga. She is also an artist and activist. She is currently collaborating on The Hooker Monologues, a theatre project that addresses stories and issues within the sex industry.
Posted by TR at 9:36 AM