What's the Deal With the Rentboy Raid? 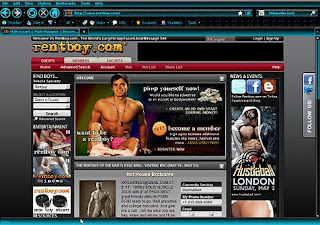 The internet has proven to be an incredible business tool for independent sex workers wishing to advertise their services and screen clients without having to fork over some of their hard-earned cash to third parties.

On August 25th, the New York office of Rentboy (an internet advertising site for male and trans sex workers) was raided and CEO Jeffery Hurant and 6 other employees were placed under arrest.

"The facilitation and promotion of prostitution offenses across state lines and international borders is a federal crime made even more egregious when it's blatantly advertised by a global criminal enterprise."

In 2010, bowing to pressure from a group of state attorneys general, Craigslist permanently shuttered its adult services section. The ads were alleged to be facilitating human trafficking for the purposes of sexual exploitation and the sexual exploitation of children – issues that have exploded into the public consciousness in recent years, due in large part to the efforts of individuals and groups campaigning to abolish prostitution altogether.

Last June, myRedBook was seized by the FBI and other federal agents for money-laundering and promotion of illegal prostitution as part of a larger investigation into sex trafficking and “child prostitution”. And Backpage has been the subject of ongoing attempts by anti-prostitution groups and celebrities to shut it down due to fears that traffickers are exploiting women and children on its pages.

More recently, Cook County Sheriff Thomas Dart convinced Visa and Mastercard to stop processing payment for ads on Backpage in his one-man campaign to shut it down. This continues to cause disruptions in sex workers’ ability to advertise.

Until now, efforts to shut down escort advertising sites have all focused on the issue of human trafficking and child exploitation and yet this concern is curiously missing from the Rentboy raid. One can only presume that this is due to the highly gendered narrative about women and girls falling victim to evil male traffickers and being forced into prostitution.

Losing Craigslist, myRedBook and interruptions in service on Backpage have all had an impact on sex workers’ ability to earn an income as they have had to find new ways to advertise their services.

It is a myth that male and trans sex workers do not also need these same services in order to keep themselves safe and thousands of them are now facing a potential drop in their income and may find themselves working in ways that are less safe.

For example, some may turn to the street to hustle for clients where they will be frequent targets for police harassment and violence. That risk is heightened for male and trans sex workers of colour.

Without the gendered concern about women and girls being exploited by online traffickers, the Rentboy raid shows that these ongoing attempts to shut down sex work ad sites are purely based on outdated morals around sexuality.

There is growing international recognition – from the UN, Amnesty International, World Health Organization – that the full decriminalization of all aspects of adult sex work is the best way forward.

Many LGBT people have participated in sex work as a means of survival and yet, have been fairly quiet about the decriminalization of sex work, including here in Canada. But who knows? Sometimes, a raid can outrage a community into action – remember Stonewall?

Kerry Porth was born in Vancouver and completed an undergraduate degree at SFU in 1986. After years working in university administration, Kerry worked in the sex trade for four years leaving her with a lasting passion for improving the human rights of sex workers. After exiting the sex trade in 2004 and embarking on recovery from substance dependence, Kerry was the Executive Director for PACE (Providing Alternatives, Counselling & Education) Society in Vancouver's down town east side from 2006 to 2012. A passionate human rights activist, Kerry is a well-respected educator who regularly lectures at colleges and universities about the sex trade. Currently, Kerry currently works as a community developer with Living in Community, a project that addresses issues related to sex work in Vancouver and is lead researcher on an SFU project on sex work governance. She is also the chair of the board for Pivot Legal Society.
Posted by TR at 9:38 AM