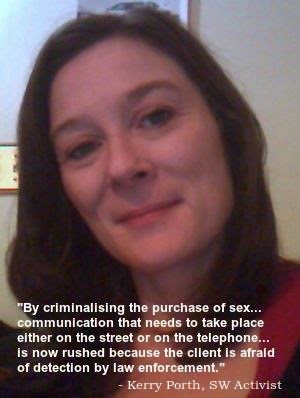 Canada is getting some attention on the world stage for its implementation of laws that criminalize clients in a sex work transaction, as well as continuing to criminalize sex workers who work in areas "outlawed" by the Conservative government - the so-called "Swedish Model."

The anchorwoman in the above clip uses oppressive language and clearly demonstrates a SWERF* perspective on the issue.

However, Kerry Porth - a sex worker rights activist with connections to PACE Society, Triple-X.org, PIVOT Legal Society. Living In Community and multiple national and international collectives - handles the woman's questions masterfully, without allowing the woman's derogatory insinuations to distract her from speaking the naked truth.

Click here to listen to Kerry Porth's responses. By the end of watching it, my husband and kids were looking at me, wondering why I was clapping so enthusiastically at my computer screen.

Here are some of the anchorwoman's misconceptions about sex work and why she needed to be schooled so badly:

"I suspect that most people find the idea of a man buying a woman's body abhorrent and wrong."


First of all, we are not selling our body. Is a hairdresser selling her hands? Is a construction worker selling his muscles? To imply that sex workers are selling their bodies is to insult sex workers. It assumes that sex and sexuality is a male creation that denigrates women. It assumes that women lose something when they exchange sex for money. It ignores that men are sex workers too. And it takes away sex workers' agency - as if we have no control in the transaction, and are simply victims of male exploitation.

"Isn't prostitution an inherently dangerous occupation because it involves being alone with a stranger who more often than not is going to be stronger than you?"


How about showing people houses for sale? Or providing lessons in people's homes? For that matter, how about having someone show up to purchase something you've listed on Craigslist? Sex work is no more dangerous than any of these activities.

In fact, sex workers are more likely to engage in more rigid screening of their clients than people in these other scenarios. What makes sex work dangerous, is having to hide it. Not being able to report to the police. How many clients are going to report an underage girl who appears to be abused to police when they could be jailed for seeking out sexual services? NONE.

Kerry also points out what seems obvious to us but not to the powers that be...clients who are scared of being jailed or outed because of these new laws don't want to give their real names or call from unblocked numbers. THIS is what makes sex work unsafe. Your stupid, fucking laws make sex work unsafe, Mr. Peter McKay.

"...wouldn't it be better that you concentrate your efforts on helping women exit this industry altogether?"


This statement assumes that all sex workers want out of the industry. UNTRUE! Many sex workers, both on and off street, enjoy their jobs for many reasons including flexibility, control over one's own work environment and rates, a higher income than they would get in other occupations, and more.

The other glaring problem with this statement, and Kerry explains it beautifully, is that exiting is next to impossible for many reasons:

These are just some of the reasons sex workers do sex work. They are the same reasons anyone works - to survive and thrive in a capitalist economy. End of story.

"Ultimately, doesn't decriminalising prostitution tell a community that it's okay to commodify a woman's body?"


I LOVE Kerry's answers to all these questions, but especially to this. She says it perfectly, so I will quote her here: (drumroll please)

"I would argue that our society commodifies women's bodies. If we're really concerned about that perhaps we should go after the movie industry and advertising. Women's bodies are used to sell just about everything from cars to power tools, so I don't know why we would just pick on sex work as evidence of commodification of women."

This interview serves as an example and a reminder that most people's messed up views about the sex industry truly come from a place of ignorance. And if we, like Kerry Porth, set the record straight whenever possible, we can use education to banish the ignorance.

Some people will refuse to consider common sense - especially SWERFs and TERFs** who make their living off and build their fundraising efforts around silencing sex workers and relegating them to victim status - but others will have an "AHA" moment.

Those who truly listen to us and see the common sense in what we are saying are our future allies. School them well and they will help us spread our message of human rights for all. #rightsnotrescue

In love and solidarity,

How would you respond to these comments and questions? Please tell us in the comments below. xoxo
Posted by TR at 10:30 AM