Prostitution bill would make it illegal to buy, sell sex in public 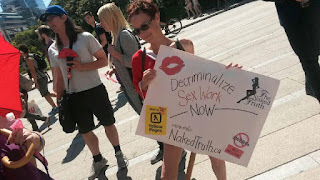 The federal government says its proposed prostitution legislation will crack down on pimps and johns, but sex-trade workers say it will criminalize prostitution and land sex workers in jail.

Bill C-36, dubbed the protection of communities and exploited persons act, would make it illegal to sell sexual services in public spaces where persons under the age of 18 could be present. Offenders could face a maximum of five years in prison.

"Today our government is making prostitution illegal for the first time," Justice Minister Peter MacKay said in a written statement on Wednesday.
"We are criminalizing the purchase of sexual services and in very specific instances the sale … in areas where young people under the age of 18 could be present," MacKay said during a news conference after the bill was tabled in the House of Commons.

The justice minister said the bill would target johns and the pimps who sell and profit from prostitution, rather than the prostitutes themselves.

While MacKay said the aim of the bill is not to target prostitutes, he said they could face prosecution if found to be selling their services in public spaces where minors could be present.

"They would face fines in most instances," MacKay said.

The bill, which MacKay has described as a "made-in-Canada" model, would also:

The new bill comes just two days after the Justice Department released the results of an online consultation that showed two-thirds of the more than 31,000 respondents said selling sex should not be an offence.

The proposed legislation is the government's response to a Supreme Court of Canada ruling in December, which found the country's prostitution laws unconstitutional.

The top court struck down key provisions including laws prohibiting brothels, living on the avails of prostitution and communicating in public with clients, saying the laws were too broad and "grossly disproportionate."

The Supreme Court gave the federal government one year to come up with new legislation.
Katrina Pacey, a lawyer for Pivot Legal Society, an intervener in the case to reform the country's anti-prostitution laws, has concerns about the proposed legislation.

"This is in fact full criminalization of prostitution ... which is going to result in sex workers going to jail."
"The minister has found various ways to limit all of the safe ways for sex-trade work," Pacey said.
MacKay said, "No model that involves full decriminalization or legalization will ever make prostitution a safe endeavour.”

NDP justice critic Françoise Boivin said she had reservations about the bill and whether it would ensure the safety of sex workers.

"That should be our No. 1 priority," Boivin said adding that "I'm not sure this piece of legislation does that."
Boivin said she would study the bill and consult with legal experts and sex workers before commenting further.

Liberal MP Carolyn Bennett worried the new bill would not stand up to constitutional scrutiny.
Appearing on a panel on CBC News Network's Power & Politics, Bennett said, "We're very concerned that it may not meet the test that the Supreme Court put forward in terms of the health and safety of women."

The Canadian Association of Chiefs of Police commended MacKay for seeking public input and for providing new funding.

"Members agree that preventing victimization and exploitation of those selling sex, and allocating funding for support programs to assist vulnerable individuals, as well as preventing community harm, are key priorities," the chiefs of police said in a written statement.